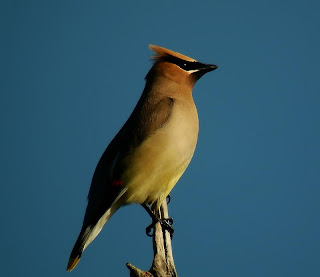 Cedar Waxwing photographed by
Bob Stanowski using Digiscope
This past Saturday, 2/5/11, while going down to the Bird Observatory behind the Museum to fill the feeders, Samantha Foster and I heard, and then saw, a group of Cedar Waxwings perched in the Mountain-ash tree near the Observatory's door. Unfortunately for them, all of the berries had been eaten off of this tree last fall by Cedar Waxwings, American Robins, Gray Catbirds, Northern Flickers, and other frugivores. That was also the last time that we saw any decent sized flocks of waxwings. According to our records stored in ebird, the highest number of waxwings reported on the Property last year was a flock of 90, seen one day in September. After that, October's high count dropped to 32, November's to 17, and December's to 8. They were reported 35 times in September, 26 in October, 13 in November, and only once in December. We didn't see any on the Property last month. Given the lack of berries remaining anywhere around here this winter, we doubt that we will see this species much this month. The flock that we saw took us by surprise, as I wasn't expecting them, given the lack of food. They didn't stay above us for long. The whole flock, which ended-up consisting of 20 birds flew to the big Norway Maple in the Activity Field, then back around over us, then off to the south. They could be in New Jersey by now.
Posted by Dave Rosgen