Flying Squirrels in the Attic 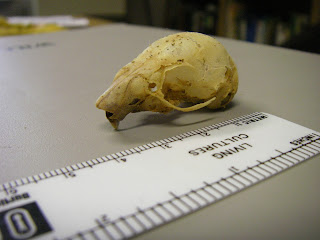 James Harmon, a White Memorial employee, found this Southern Flying Squirrel (Glaucomys volans) skull in the Carriage House attic.  I want to show you some of the features that helped us distinquish this skull from other squirrel species.  It is recommended that you use calipers to record measurements, but in this blog entry rather than emphasizing the measurements I want to clue you into the characters that we like to use in the field.  Further analysis is always best when you compare and contrast several skulls from known species, which are conserved at natural history collections. 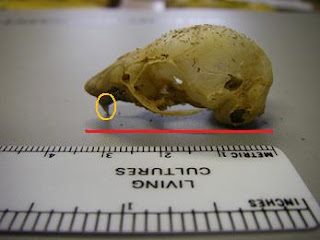 The first thing that told us it was rodent was that it had only two front teeth with a large gap, where the canine teeth would have been located, before the rest of the cheek teeth (premolars and molars).  The red line delineates the total length of the skull.  The cheek teeth are rooted and several other subtle characters allowed us to focus on the tree squirrel species that live in this area. 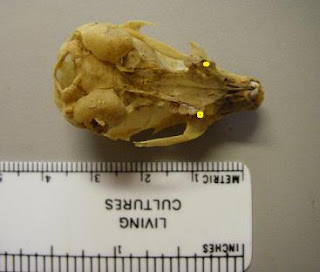 The yellow circles at the beginning of the cheek teeth delineate the presence of very small premolars, this character distinguishes Red Squirrels (Tamiasciurus hudsonicus) and Gray Squirrel (Sciurus carolinensis) from flying squirrels.  The total length of the skull tells us it is a Southern Flying Squirrel from a Northern Flying Squirrel (Glaucomys sabrinus).
Posted by James Fischer