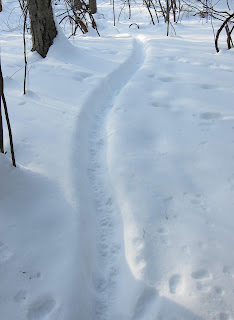 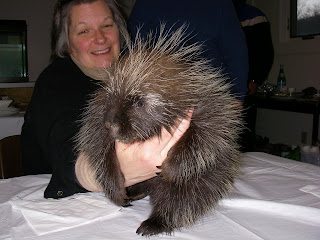 Porcupine photo by Dave Rosgen
Porcupines are really neat rodents. The juvenile in the photo above, being held by WMCC Director of Administration and Development, Gerri Griswold, was found in poor condition by a Warren resident last week. It was brought to Gerri, who is also a licensed wildlife rehabilitator. It was seriously malnourished, may have been separated from its mother too soon last fall, and may have had other health problems. Despite a huge amount of effort by Gerri and fellow wildlife rehabilitator, Lois Melaragno, the porcupine died last night. Winter is a stressful time for most wildlife, and despite having a diverse diet of plant-type foods, porcupines can suffer from starvation. Their principle cause of mortality in Connecticut, however, seems to be roadkill. At least that is an obvious cause of death for ones that we who frequently travel roads in Winchester, Norfolk, Colebrook, Barkhamsted, and Hartland see. Those towns host more porcupines than towns further to the south. They are found in Litchfield, but almost all of the reports have come from north of Rt. 202. At least 4 have been seen dead on Rt. 202 in the past few years. The closest one to White Memorial was near the State Police barracks. As yet, none have been documented as occurring on our Property, even though we have plenty of suitable habitat. Besides the ones found dead on Rt. 202, there have been a few reports from the northern part of Litchfield and various parts of Harwinton and Burlington, and one report, each, from Watertown and Rt. 109 near the Morris/Thomaston town line. Are we just missing them at WMF? Winter is a good time to look for them, as they leave a trough through the snow as they move. Care must be used in identifying their presence this way because raccoons and opossums will make a trough through deeper snow, too. A picture of porcupine trough is shown at the top of the post.
Posted by Dave Rosgen